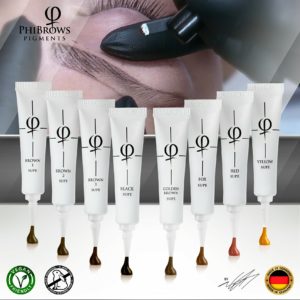 Why settle for anything less than the best when having a semi permanent procedure on your face? Here at Beau we only use the very best pigments and tools for our microblading procedures.

– PHIBROWS MICROBLADING PIGMENTS
SUPE formula is the fifth generation of PhiBrows pigments. This means that the original synthetic microblading formula has been improved 4 times in the last two years.

Previous formula (SUP) was characterized by two most stabile pigments – Black (synthetic) and Red (iron oxide). However, yellow was problematic with both kinds due to its weak stability. Its absence resulted in eyebrows that did not fade in a brown shade after a year. That was a general problem, not only with PhiBrows pigments, but with all the other pigments on the market.

Only in certain cases when the ratio of colours in relation to natural skin pigments was right, we were able to have a nice brown colour even a year or two years later.

With pure synthetic pigments, the colour would become greyish in the end, which was much more acceptable than with pure iron oxide pigments that became red.

Today, technology enables us to compress pigments, which makes them a few times more stable.

This was a solution for yellow.

Now the SUPE formula contains all three extremely stable colours that provide incredible consistency in the original shade. The colour fades much slower and keeps the desired shade until it disappears completely.

This is the first pigment in the market for which the manufacturer guarantees that it will not change its shade with time in comparison to the shade after healing.

Technology of pigment compression opens a lot of new possibilities so we can see in the future a new formula in which all the pigments will be compressed.

SUPE pigments do not require additional mixing with basic colours in order to make them warmer.

As in our previous formulas, all pigments are still:
– hypoallergenic,
– in accordance with RESAp 2008 resolution,
– vegan friendly
– not tested on animals